All the 50 commercial stands for the major event were snapped up by local companies keen to capitalise on the previous successful event. Formerly known as Bradford Business Conference, the event is in its fifth year and has been rebranded YEN Expo 2016, reflecting the broader reach and Bradford’s re-established standing in the regional business arena. 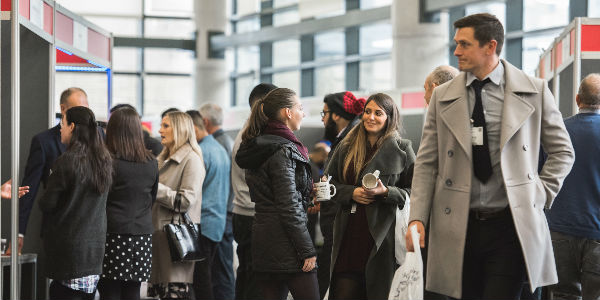 Run by YEN (Yorkshire Enterprise Network) the conference attracted over a thousand delegates from across the country, as the event widened its scope to focus on creative businesses and careers, whilst retaining a focus on the city’s regeneration.

Imran Hafeez of the Bradford Literacy Hub said the event was an excellent way to appreciate the rich variety of the local business community, providing a rare opportunity for consumers and business people alike to discover new companies and to make valuable contacts.

“We know from previous events that a lot of business has been passed between both companies present and via delegates attending. In some cases, this has resulted in enduring and lucrative business relationships.

“There is always a great buzz at these Expos with so much going on. We’ve had very positive feedback from all those attending in the past and I think the fact that all the stands have been sold so quickly and pre-registration numbers are already very high shows the genuine interest that this year’s event created.”

Ellie MacDonald, founder of PR-led marketing and communications firm, MacComms believes Bradford is the ideal place for the next generation of business owners to start up and progress their career.

“I was delighted to have been asked to be a panel member at the Young Entrepreneurs expo. I would highly recommend starting up your own business but it is hard and can be lonely at first so it is important to gain as much support and business knowledge as possible.”

Bradford-born author A A Dhand is of the opinion, Bradford as a city, is fighting to return to its rightful place as a leading industrial centre and “a true Northern Powerhouse”.

He said: “I set my books against Bradford’s struggles with a hint at the way it is changing and the new developments. I feel Bradford is a city trying to get back to its rightful place when it was a leading industrial centre. There is a fair way to go with the infrastructure and so on, but I believe our city has the potential to be a Northern Powerhouse.”

YEN Director Sheraz Malik believes this year’s conference was one of the most exciting ever. As well as bringing back many of the most popular sessions from last year, Malik said the organisation introduced ‘a lot of new elements to ensure there is something for everyone’.

“It’s the most varied programme of events we’ve ever had, covering a fantastic range of subjects,” said Malik.

“It was really great to be able to bring such a strong programme of events to Bradford. We were delighted to see so many delegates making the most of all the sessions on offer, as well as enjoying the networking opportunities. We were also pleased to welcome delegates from across Yorkshire, giving us the opportunity to showcase what Bradford has to offer and let everyone know the city is well and truly open for business.

“There were some very important issues raised in the various panel discussions and we were proud to hear from people at the event that YEN is now seen as one of the most proactive bodies in the Region at bringing organisations together for the mutual benefit of business success and the local economy.”

All of whom examined the impact of sport on the economy and regional employment prospects as well as topical and thorny issues surrounding the integrity of sport.

Gerry Sutcliffe, now director of Sutcliffe Swales Consultants and a Yorkshire Enterprise Network patron, said: “The opportunity to hear from some highly experienced people involved in the business of sport was a very lively session. Sport has a massive impact on our economy, providing scope for more investment and employment opportunities as well as the all-important feel-good factor. It is vital, more than ever right now, to maintain the belief in sport.”